Well . . . I am not celebrating Christmas all over again, but I have recently finished several Christmas projects that have been in the UFO pile for many months. It feels great to complete them, knowing they’ll be fun to display and use next December!

My friend Colleen made a table runner for her daughter that I admired, and I hinted strongly that I would like a small quilt made with the same bright fabrics. Isn’t this wall quilt so much fun? (Thanks, Colleen!)

Over a year ago I made this table runner with a package of 5″ charm squares. It was an alternate coloring of “Chroma Keys,” published by Quilting Quickly, Nov/Dec 2018. Click here to see the blog post picturing “Chroma Keys.”

I quilted both the wall hanging and the table runner with the “Winter White” pantograph of snowflakes and loops by Dave Hudson. I used a polyester silver gray thread which shows up nicely against the darker fabrics. (Click on either picture to zoom in for a view of the quilting design.)

Are you working on finishing any winter holiday projects?

During the Second Quarter (April – June) I’ve challenged myself and blog readers to cut and store scraps in an organized and usable way. I find it easier to cut into my odds and ends if I have a scrappy quilt project in mind. Then, as I cut, I can set aside the squares or strips that would work well in a particular project. Those fabrics that are too small or two few to be used in the project I’ll cut and store in boxes with others of like size or shape.

One of the scrap quilt designs I’ve recently admired on Pinterest is a simple “Irish Chain” made of scrappy “Nine Patches.” This pattern, of course, can be made with any size square (the smaller, the cuter). Since I have an abundance of 2 1/2″ squares, I planned to use that size, making 6″ finished “Nine Patches.” While looking on my fabric shelves for the container of partially constructed scrappy patchwork house pieces, I opened a mystery bin containing … you guessed it … “Nine Patches.” (More about the scrappy houses later.)

I remember making these blocks a couple of summers ago when most of my fabric was in storage. I just cut and sewed the scraps I had taken to our temporary living quarters. The bin contained 28 blocks, more than I need for a lap quilt. Most of the blocks were blue or green; a few were red. Since I plan to donate the quilt to the local Veteran’s Hospital, I set aside those that are too juvenile or feminine. I made a few more blue blocks to obtain the 25 “Nine Patches” needed. I alternated them with 24 print 6 1/2″ squares arranged in a 7 x 7 grid. 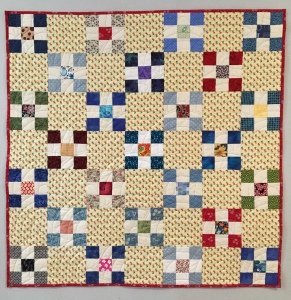 With blue thread, I quilted a “Baptist Fan” all over design. Taking a cue from the red accent squares, I bound the quilt with a red print. My friend Carol K. will approve; she says every quilt should include a little red. I am pleased with this very scrappy quilt. It is simple yet comforting and homey. Besides, it is almost a free quilt: The “Nine Patches” were made from scraps, the alternate squares came from the trimmings of a quilt backing, the navy blue paisley backing was leftover from another quilt backing, and the red print binding was from stash!

Here’s another idea for a smaller “Nine Patch” quilt. On March 17, 2014 I posted a tutorial for a table topper “Irish Chain” made with 2″ squares. Click here to link to the blog post.

What colors or size squares would you use to make “Irish Chain?”

We are expecting a new grandson in June. And you know what that means . . . Grandma needs to make a quilt to celebrate!

My local quilt shop, Loving Stitches, currently stocks “The Adventurers,” a line designed by Cori Dantini for Blend. The pictures are so sweet and just perfect for a baby boy!

Here’s a lay-out of all the blocks. I think they need some sashing so each picture can be appreciated. Take a look at the lower left corner; I auditioned 2 blues from stash that blend with the colors in the quilt blocks. I think I like the lighter blue better. The darker blue draws my eye to the sashing instead of to the sweet pictures. What do you think?

Off to the quilt shop I go! I figure I need 2 1/2 yards for sashing, border, backing and binding. 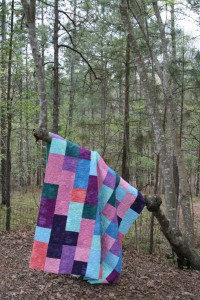 This past week I quilted two quilts for my friend, Anissa, one for her daughter and one for her son. Anissa found the pattern on the Fat Quarter Shop’s blog, The Jolly Jabber. Click here to travel to the August 6, 2014 blog post which details how to make “Fat Quarter Fizz.”

Lots of rectangles and squares . . . irridescent colors . . . the spring time colored fabrics remind me of glittering dragonflies. I asked Anissa if her daughter might like an all over quilting design of dragonflies and flowers. Yes! Now take a look up close and view the transformation quilting makes to a design of simple rectangler shapes. I used a variegated thread of bright colors. I love the effect!

Anissa selected different colors for her son’s quilt. I like the way she arranged the fabrics in diagonal stairstep rows, alternating cool colors with warm colors. Brainstorming for quilting design ideas, we looked through my box of pantographs. We found several that might work for a young guy. Anissa settled on spiderwebs because her son is a fan of Spiderman. Again, from a distance, the quilt looks like rectangles and squares of vibrant color.

The close up view adds a surprising textural layer. It’s as if the colors and shapes now have something meaningful to say. 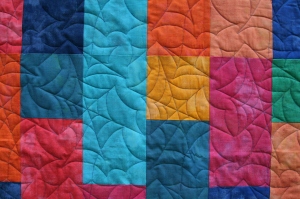 I love my job . . . adding that extra layer of stitched interest . . . giving lively zip to colored rectangles and squares . . . enticing the viewer to come closer and see what the quilt will communicate.

Isn’t this a bold, fun quilt?

The block design is simple – a large square, 3 small squares and a rectangle. But the overall appearance of the quilt is awesome because of the chosen fabrics. Various shades of teal, black, and white boldly say, “Look at me!” And I surmise that various shades of ANY color plus black and white would make an equally striking quilt.

Capitalizing on the floral print motif, I quilted large flowers in each of the 8″ squares. I filled in around the flowers with heart-shaped leaves and loops, all with a variegated teal thread.

This charity quilt made by members of the Colonial Piecemakers in Williamsburg, Va. proves that you needn’t piece an intricate design in order to achieve an awesome quilt. Let the fabric do the talking with a simple block design.

In a previous post, “Experiment in Blue,” I wrote about a quilt made with 3 1/2″ wide blue strips. Not entirely satisfied with the results, I re-made the quilt. I hoped to answer some of the questions that arose from the first experiment.

I think the graduated horizontal white bands of the skinny quilt do accentuate the gradual increase in the length of the blue strips. I cut them 3 1/2,” 4 1/2,” and 5 1/2″ for this quilt. But to the casual observer, the blue strips in the bottom two rows look about the same length. If I make the quilt again, I will cut the strips for the fourth (bottom) row 12″ again, but I will cut the strips for the third row 6″ instead of 8.” Perhaps a more drastic difference in measurement will achieve the look I aim for.

If I make a baby quilt, I might cut the strips 12,” 6,” and 3″ and leave off the fourth row of blue. By having just 3 blue rows, the quilt would be square-ish instead of rectangular.

What do you think? Should I perform another quilt experiment, or move on to different project?

At the September meeting of the Tarheel Quilters Guild, our president offered us a table full of free fabric obtained from a generous donor. The only stipulation for taking some fabric was that we make a quilt for charity with it.

Since blue is my favorite color, I chose the fabrics below. The print is a wintery scene with bare trees, and the stripe is a poly/cotton twill (shiftier than 100% cotton). I decided to use the stripe as binding fabric.

I wanted to experiment with making a lap quilt using strips of 3 1/2″ wide fabric. I planned for horizontal rows of increasing lengths of rectangles. I wanted 4″ wide white bands between the rows and “teeth” of colored fabric extending into the white bands.

I found 4 blue fabric tonals/prints in my stash to coordinate with the tree print and wondered how many WOF (width of fabric) strips of each fabric I would need to make a lap quilt. The answer for this quilt is “3.”

Am I happy with the results of my experiment? Somewhat. The quilt looks nice, but I wanted the increasing length of rectangles to be more obvious; I suppose my measurement changes were not drastic enough. I would like to experiment again with strips cut 3″ wide. And I think I will also increase the width of the white bands from the top of the quilt to the bottom.

Back to the “lab” for more experiments!

Each Christmas the Tarheel Quilt Guild, of which I am a member,  presents lap quilts to patients/residents of the Veterans Administration Hospital in Fayetteville, N.C. Guild members are encouraged to make more than one to meet the 300 quilt goal. Most of my stash is floral, juvenile or patriotic in theme, but I do have a container of Homespun yardage and scraps. Many of the V.A. residents are male, and Homespun plaid fabric is perfect “guy” fabric.

Inspiration for this quilt came from Rita Hodge’s blog, Red Pepper Quilts, “Seashells by the Seashore”. My rectangle bricks were cut 4 1/2″ x 7.” There are 11 columns with 8 bricks per column. I alternated Homespun plaids with various ecru and tan bricks. After assembling the quilt top, I stay-stitched all around the quilt to prevent the seams from splitting apart during the quilting process. The quilting design is my variation of “Dwirling,” and looks similar to countour plowing. The binding is a green and black check fabric cut on the bias. The quilt measures 44″ x 51.”

This quilt was so quick and easy to make, I plan to make another . . . there is certainly more Homespun fabric in my container!