When I met up with my friend Marie at a quilting retreat in late February, she had a quilt to show me.

Marie used my pattern “Buttons for Betty” that I developed as an efficient way to use a Layer Cake (i.e.  a stack of 10″ squares). You can see that the blocks alternate between a “Square in a Square in a Square” and an “X Block.” The method: Choose three 10″ squares of contrasting colors, carefully stack them one on top of the other, cut through all three layers according to the instructions, swap the fabrics so that the design appears, sew each of the three blocks together. Therefore, you cut for one block, but you get three blocks because you stacked the three fabric 10″ squares to begin with.

Marie’s fabrics:  Years ago, when stationed in Germany, Marie ordered a bundle of fat quarters online. She hasn’t used them until recently because while there were several different colors and prints, each colorway had the same prints. She had hoped for more variety in prints/textures. Marie found that “Buttons for Betty” was a great way to use this languishing bundle; she cut two 10″ squares from each fat quarter and used the leftovers for a Piano Key border and for a pieced backing.

The back of Marie’s quilt is just as interesting as the front! I love the four little “Shoo Fly” blocks interspersed with the fabric scraps. 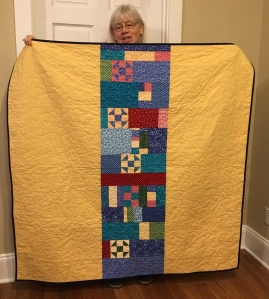 Let me know if you’d like to purchase the “Buttons for Betty” pattern, trying my quick cutting method: Layer, Cut, Swap, and Sew.  (Leave a comment, and I’ll email you privately.)

2 thoughts on “Marie’s “Buttons for Betty””

This site uses Akismet to reduce spam. Learn how your comment data is processed.